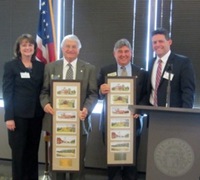 On Tuesday, March 13, 2012, State Senator John Bulloch, State Representative Gerald Greene and Early County 2055 hosted a legislative reception in Atlanta, Georgia. The purpose of the reception was to celebrate the progress of Early County 2055 and the completion of the Advancing Early Initiative 2012 (AEI2012), the five-year strategy carved from our Early County 2055 50-year master plan. What started with a generous gift from the Charles and Catherine B. Rice Foundation has become an exciting economic revitalization project that is helping to preserve the area’s valuable history and culture, while building the framework for a diversified economic structure and master strategy for the future.

Many state officials and distinguished guests attended the event, including:

During the brief program, Lisa Collins, Director of Economic Development, stated, “Today we are proud to announce that all goals set for Advancing Early Initiative 2012 (AEI2012), our five year action strategy for the 50-year Early County 2055 master plan, have been met! We have been successful in attracting four new retailers to Early County, thereby creating 82 new retail jobs. She further noted the county was successful in convincing American International Marksmanship Academy (AIM) to locate in Early County. In their first six months of business, AIM created 30 direct jobs and 100 indirect jobs, with over $8 million in capital investment and an economic impact of over $1 million.”

Ms. Collins said phenomenal progress has been made to clean-up the community. The AEI2012 five year goal to identify and demolish 35 dilapidated dwellings in Blakely was exceeded by partnering with the City of Blakely to remove 236 neglected structures. In addition, the goal of creating 24 new single-family homes was surpassed by partnering with Hammond Development of Atlanta to create 64 new single-family rentalhomes.

Collins noted that by utilizing GA DOT Transportation Enhancement funds, construction of an attractive gateway entrance on the US Highway 27 bypass has begun, and will draw travelers off the bypass into the historic downtown Court Square of Blakely, creating additional revenue for the city of Blakely. It will also provide a visitor’s center and enhance the community’s wetlands. In addition, she added $1 million has been raised to renovate the historic Chamber building into a conference space and a businesslike Chamber facility, with construction expected to begin by June 2012.

Collins announced the next phase, an 8-year economic development strategy, will be called 2020 Vision. Priorities will likely focus on attracting new businesses to support the growth of AIM, including hotel, retail and manufacturing; transforming the Magnolia Street corridor from the East Gateway to Blakely Court Square to increase shopping opportunities for tourists and residents alike along the main entrance into town; development of a Façade Improvement Program for Blakely Court Square and surrounding corridors; continued creation of viable housing options; continued community cleanup of dilapidated structures; and enhancement of community recreational opportunities for youth.

In conclusion, Ms. Collins asked legislators and state officials not to forget our part of the state, and asked for their commitment partnering with Early County to continue the county’s extraordinary efforts of creating jobs, growing the tax base and improving the quality of life for all citizens in Early County.

After Collins presentation, Early County 2055 presented State Senator John Bulloch and State Representative Gerald Greene with framed watercolor prints of Early County scenes by local artist, Priscilla Perkins, along with a plaque of appreciation. Senator Bulloch addressed the crowd and stated, “Accolades to Early County. Out of the eight counties which I represent, Early County is the only one which has an event in Atlanta inviting legislators and key state officials.” Representative Greene remarked, “Through the efforts of Early County 2055, Early County’s leadership has achieved remarkable success by completing the original goals set forth in the 5-year Advancing Early Initiative 2012 plan. I look forward to continued economic growth and prosperity for the county. Indeed, the future is bright!”

Special guest, Secretary of State Brian Kemp, commented, “It has been wonderful to meet with community leaders from Early County. We share the same goals of growing jobs and building strong communities. As a small business owner, I greatly appreciate Early County’s dedication to economic development and to protecting small, local businesses.”

State Representative Kevin Cooke (R-Carrollton) said, “I continue to be impressed with the professionalism of Early County 2055 and their efforts to create economic development opportunities. Early County 2055 is providing a great model for other communities across the state. The hard work and commitment of the Early County community is to be commended. I plan to visit again soon.”

State Representative Delvis Dutton (R-Glennville) observed, “Every time I visit Early County, or any event you sponsor, I am reminded of what a remarkable community you have. What the Rice family, the Early County 2055 staff and the residents of the county have done together is remarkable and should be emulated. And this is just the beginning!”

Local attendee, Lee Conner, Executive Director of SGRITA, said, “The EC2055 legislative reception was an extremely beneficial event. It provided an opportunity for us to meet with the top decision makers in the state, instead of meeting with staffers. I was able to voice concerns to our legislators and discuss critical opportunities for Early County.”

Blakely-Early County Chamber President, Christie Haynes, remarked, “The EC2055 legislative reception was a great success and an excellent opportunity to discuss all of the positive things we have going on in Early County. I was extremely pleased and proud with the number of constitutional officers and legislators that attended the reception. I see their attendance as a true testament to the hard work of our community and the progress that has been made over the last six years.”

Following the legislative reception, on Wednesday, March 14, 2012, Early County 2055 hosted a breakfast at the Centergy Building in Atlanta, Georgia. The purpose of the breakfast was to once again celebrate the progress of Early County 2055 and the completion of the AEI2012 strategy.

Even though the message was basically the same, the invited guests were different. Attendees represented the important entities that drive economic development in the state of Georgia.

Lisa Collins, Director of Economic Development, reminded the special guests attending that Early County has outstanding leadership and, as a small rural community, is constantly looking for ways to be creative with limited resources. “From an economic development perspective, we have made tremendous progress over the last six years. Early County now has a dedicated office and staff, has competitive advantages for food processing/manufacturing, bio-fuel manufacturing & call centers, and has a website which promotes community and economic development.” In addition, she informed the group that Early County has a first-class industrial park, as well as generous incentives for businesses which desire to locate in our county.”

In addition, Barton Rice gave an update on the American International Marksmanship Academy and Lee Conner informed the group of the many exciting opportunities that SGRITA (SyncSouth) is providing to Early County and the entire region.