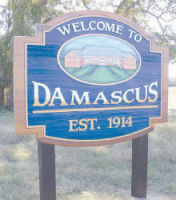 The new welcome signs recently erected along the roads leading into town are a hint that positive changes are underway in Damascus.

The city of Damascus was on the verge of becoming a footnote to the pages of Early County history in 2006.

"We actually explored the possibility of dissolving the city's charter when we took office and saw the extent of the city's financial problems," stated Mayor Heath McDowell.

McDowell and a new city council — Connie S. McDowell, Robert Brunson, Hoyt Patterson and Kevin Tabb — were nearly overwhelmed when they discovered the extent of the city's problems after taking office in January 2006.

The small town of 260 people was over $100,000 in debt, had lost its eligibility to receive state and federal grants and had been operating a number of years without a budget or audit as spiraling costs overshadowed revenues.

"The city's water system was experiencing constant water outages due to major water leaks and only 35 of the city's 100 water customers were paying their water bills," McDowell stated. "There had been no police protection for several years and there was no equipment for maintenance — the city could not even cut grass."

"We didn't qualify for SPLOST monies due to the misappropriation of SPLOST funds several years earlier," he stated. "And we couldn't even get a loan from a bank."

McDowell and his fellow councilmen quickly set aside the idea of dissolving the city's charter and set out on an effort to steer the city onto a road of recovery.

They sought help from the City of Blakely to repair the major water leaks which enabled them to restore dependable water service.

They increased the monthly water fees to $35 for residential and $75 commercial, are installing meters and cutoff valves, and all the city's customers are now paying their water bills.

An ad valorem tax implemented by the council, coupled with the revenue from the water fees, has enabled the city to secure a bank loan, repay the misappropriated SPLOST monies and other debts, including $6,500 to the city's fees.

The council also learned that audits of the city's finances for the years 2002 through 2006 had to be conducted before they could qualify for any grants.

The audits have been completed and the city has been approved for a Community Development Block grant for infrastructure improvements. An Immediate Threat and Danger grant of $41,000 has been approved for unbudgeted water repairs, EPD is paying for a new well, and LARP monies are making the paving of Ballpark and Bull streets possible.

The balance of SPLOST funds has been released to the city, including the money paid back. Those monies, initially earmarked for recreation facilities, have been used for ball field improvements including new bleachers, a concession stand, and a remodeled bathroom to provide men's and women's restrooms. The money also helped build a basketball/tennis court and purchase playground equipment. A recreation committee has also been created thanks to several citizens willing to volunteer.

Police protection is again in place for the residents of Damascus with two police officers and two patrol cars — already paid for.

Badly needed equipment has been purchased — including a tractor, backhoe, two lawnmowers, an edger, weed-eater, golf cart, and a concrete saw for repairing water lines.

"We can now finally provide the necessary maintenance of our water system," McDowell stated. "And the grass is cut on a regular basis now."

In partnership with EC2055, they have been able to tear down a dilapidated building on land donated by James O. McDowell. The land will be used for a fenced-in playground to be named McDowell Park. Each member of the council donated a pallet of grass to be planted at the park location.

The mayor, council and several interested citizens are trying to implement a beautification committee and the council is hoping to partner with the STEP Coalition, an after-school tutorial program for the education of the youth of Damascus.

The efforts the Damascus mayor and council have undertaken to restore the good standing of their community is a story worth telling.

Mayor McDowell stressed one important point about their efforts... "None of these accomplishments would have been possible without the dedication and diligence of each council member and the support of the citizens of Damascus."